Saving Iraqi Turkmens Is a Win-Win-Win

by Michael Knights
About the Authors

Michael Knights
Michael Knights is the Boston-based Jill and Jay Bernstein Fellow of The Washington Institute, specializing in the military and security affairs of Iraq, Iran, and the Persian Gulf states. He is a co-founder of the Militia Spotlight platform, which offers in-depth analysis of developments related to the Iranian-backed militias in Iraq and Syria.
Brief Analysis

A U.S.-backed effort to save besieged Iraqi Turkmens in the Tuz Khormatu district could bring Baghdad, the Kurds, and Turkey into a joint fight against the ongoing jihadist offensive.

In the battle for Iraq, the Islamic State (IS) continues to hold the initiative in its quest to establish a caliphate within the territory it controls in Iraq and Syria. In response, Baghdad and its allies need to quickly break the group's momentum and deflate its image -- and they can do so with a significant victory that involves as many allies as possible, demonstrating that the entire region is bandwagoning against the IS.

U.S. military intervention in Iraq's security crisis could be drawing closer as politicians in Baghdad tentatively move toward a more inclusive government under a new prime minister, and as U.S. assessment teams report back their initial findings on the status of Iraq's security forces. The next stage for U.S. planners may be to help Iraqi authorities craft a political-military campaign that can get the security forces back on their feet and win undecided Sunni tribes and militants over to the government's side in the fight against the IS, which until recently called itself the Islamic State of Iraq and al-Sham (ISIS). Turning the tide arguably depends on two factors:

Relieving the desperate suffering of besieged Turkmen villages in Tuz Khormatu district -- an enclave roughly halfway between Baghdad and Mosul -- would appear to tick all of the above boxes (see map). 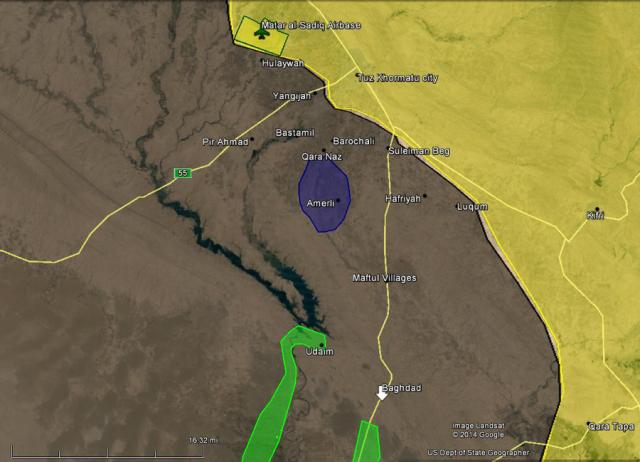 IRAQI TURKMEN ENCLAVE UNDER SIEGE, JULY 2014: Green areas represent federal government-held areas; black areas are insurgent-controlled areas; yellow areas are peshmerga-held. The blue area is the Turkmen enclave at Amerli. Baghdad lies 100 miles to the south, Tikrit 60 miles to the west, and Kirkuk 40 miles to the north. Click on map for larger view.

Northern Iraq's Turkmens are a Turkic-ethnicity, Turkish-speaking minority that includes Shiites and Sunnis alike. Shiite Turkmens, who comprise most of the large Shiite communities in the Sunni-majority north, have long been intensely targeted by ISIS/IS and its predecessors (al-Qaeda in Iraq, the Islamic State of Iraq). In mid-June, the group brutally drove over forty thousand of them from the Turkmen center of Tal Afar, west of Mosul. Days later, it massacred forty civilians in Bashir, a Turkmen town near Kirkuk, prompting Kurdish peshmerga fighters to move beyond their purely defensive positions in Kurdish areas to assist Turkmen militias.

A similar scene is now unfolding fifteen miles south of the Kurdish-held city of Tuz Khormatu, where the Islamic State is besieging a pocket of around twelve thousand Shiite Turkmen civilians in the Amerli subdistrict. The group has already captured outlying Turkmen villages such as Bastamil, Barochali, and Qara Naz, driving local families into the subdistrict center at Amerli. This center  was the scene of a massive al-Qaeda truck bombing on July 7, 2007, that killed 159 civilians and wounded over 350. Now it is being defended by around 400 local Turkmen armed volunteers. The Iraqi army has attempted to fight its way up the Udaim River Valley to make contact with the pocket, but its advance stalled twenty miles south at Udaim Dam. Meanwhile, the Iraqi air force is flying ammunition, vital medical supplies, and even baby formula into the pocket using unarmored helicopters, which are exposed to IS heavy machine gun and sniper fire. Almost a month into the siege, Turkmen residents of Amerli claim that 175 people have died, and there is widespread fear of a sectarian massacre if the defense fails, since they have no open line of retreat.

Supporting the Shiite Turkmens of Amerli could be the iconic fight that Iraq needs at this moment. The Shiite-led federal government is desperate to prevent another sectarian cleansing episode such as the one suffered at Tal Afar, which was too remote to save. In contrast, Amerli could be relieved if the Iraqi army receives timely support. Iran has ties to the Shiite communities around Amerli and could be counted on not to interfere with such an effort. Indeed, Tehran is already pressuring the Patriotic Union of Kurdistan (PUK) to fight the IS more broadly, and an operation to relieve Amerli would fit into this effort. Further support would likely come from Turkey, which has gone to great lengths to support this particular Turkmen community in the past, flying air ambulances into Amerli following the 2007 bombing and evacuating the wounded to Turkey.

PUK fighters in the Tuz Khormatu area are likewise slowly being drawn into the local fight. When peshmerga prevented an IS car bombing against Shiite Turkmens in Tuz Khormatu city on June 19, the group responded by shelling and assaulting the nearby peshmerga checkpoint for four hours. The PUK has also facilitated the insertion of Turkmen militias into the Amerli pocket and blocked the path of IS oil-smuggling trucks in the area. Thirty miles to the southeast, an IS suicide bomber from Kazakhstan detonated a suicide vest at a peshmerga checkpoint on July 14, killing two fighters and injuring five -- one of the group's several recent attacks on the Kurds in the Hamrin Mountains region.

Some local Sunni insurgents could also be expected to stand aside or launch their own anti-IS operations in conjunction with a coalition effort to relieve Amerli. In the adjacent town of Suleiman Beg, the neo-Baathist militant group Jaish al-Tariqa al-Naqshbandia (JRTN) has launched at least four attempted uprisings since January 2013, only to see IS fighters stride in and take over after the most recent uprising succeeded in June. The two groups are now fighting a low-level war for control across the Hamrin Mountains region; this week alone, twelve JRTN fighters were found executed by the IS at Saadiyah, sixty miles southeast of Amerli. Moreover, before ISIS/IS ramped up its presence in the Amerli area in the past year, local Turkmens had good community relations with the Sunni Arabs at Suleiman Beg.

As illustrated above, saving the Amerli pocket could strike an iconic blow at the Islamic State and draw together a rare community of interest between Baghdad, the Kurds, Turkey, Iran, and Washington. With the new Joint Operations Center established in the Kurdistan Regional Government in northern Iraq, the United States is well positioned to provide planning, coordination, logistical help, and airstrikes in support of any joint operation in the area. The U.S. military and PUK forces remain on very good terms, and U.S. personnel have extensive in-house experience working with local tribes and community leaders in Amerli, Suleiman Beg, and Tuz Khormatu city. The soldiers and civilians involved in past joint activities are only a phone call away, and some have already signaled their willingness to help old contacts in Amerli.

In short, many of the most promising arenas for U.S. intervention can be found in vital northern and western Iraqi battlegrounds away from Baghdad. If Washington's conditions for military intervention are met, a coalition effort to relieve the Turkmens at Amerli would be a good place to start. Such an operation would ideally be one of a number of linked battles that also fit the criteria of being achievable and in the interests of multiple factions -- hopefully building outward from the Tuz Khormatu, Kirkuk, and Lake Hamrin areas as Sunni militants looked to the example of Amerli and overthrew the IS presence in their own communities.

Operationally speaking, the United States is capable of resupplying the Amerli pocket with humanitarian and military supplies by air, effectively using night operations and airdrops in ways that Iraqi forces cannot. It could also evacuate the worst casualties and most helpless civilians. And a modicum of air support from the drones that already fly over Iraq would greatly improve the morale and survival chances of fighters in Amerli, as well as any Iraqi and Kurdish forces that push forward to relieve them. In addition, such strikes would be a timely reminder to allies and adversaries of the ongoing potency of U.S. airpower, and President Obama's willingness to use it when conditions are right.

Michael Knights is a Boston-based Lafer Fellow with The Washington Institute.

Brief Analysis
Kurds Are Fleeing Iraq in the Face of Uncertainty
Dec 7, 2021
◆
Articles & Testimony
Lebanon Stands at a Crossroad Between a Painful Revival and a Complete Submission to Iran
Dec 7, 2021
◆

Brief Analysis
The Future of al-Tanf Garrison in Syria
Dec 6, 2021
◆