by David Makovsky
Also available in
About the Authors

David Makovsky
David Makovsky is the Ziegler distinguished fellow at The Washington Institute and director of the Koret Project on Arab-Israel Relations.
Brief Analysis

Whether or not Palestinian units are actually built in Area C, the announcement will be a net loss if Israeli construction outside the security barrier becomes the new norm post-election.

On August 5-6, an Israeli interministerial committee approved two batches of settlement units for the West Bank, some for Israeli settlers and some for Palestinians. Both announcements seem motivated by sundry factors, and their consequences could prove wide ranging. The new Israeli units may be tied to the upcoming do-over elections, but their placement would represent a troubling shift if repeated after the vote. As for the Palestinians, the decision marks the first time in three years they have been granted any units in Area C, the portion of the West Bank where Israel assumed full control after the Oslo Accords. The fact that both announcements were made concurrently is not coincidental.

A large majority of Israeli settlers live in units located inside the West Bank security barrier and close to Israeli urban areas. This zone constitutes only 8% of the entire West Bank, either along or adjacent to the 1967 ceasefire lines, and most previous rounds of settlement approvals were located there. This time, however, two-thirds of the units approved or in the penultimate stage of approval—1,609 out of 2,343—are outside the barrier. 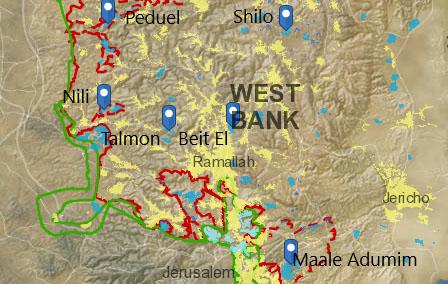 Restricting new settlements to areas inside the barrier can help maintain the viability of a two-state solution, since these settlements would likely be annexed into Israel as part of a process of territorial exchanges during final-status negotiations. In that sense, at least, such settlements can be viewed as less provocative. Yet adding new units outside the barrier is highly provocative and makes future separation between Israelis and Palestinians more difficult. The question is whether this move is the start of a new trend or a temporary political expedient.

THE PROCESS OF SETTLEMENT APPROVAL

In recent years, Israel has restructured the approval process to reduce the prospects of sudden announcements that may prove politically embarrassing, as happened in 2010 when new East Jerusalem housing units were approved during a visit by Vice President Joe Biden. Today, new unit requests must go through six stages before authorities give final approval. The August 5-6 meetings focused on the last two stages: units approved for immediate construction, and units whose approval is nearly final pending a sixty-day period for legal challenges that are rarely sustained, meaning they can safely be grouped with the first category.

Last week’s tally of approved units was one of the largest in years, though it remains unclear how much the new units will expand the actual footprint of Israel’s presence in the West Bank. In the past, Prime Minister Binyamin Netanyahu’s governments have established informal understandings with Washington whereby settlement expansion is kept within areas adjacent to built-up units rather than extending to entirely new areas; it is uncertain if these agreements still hold true.

Currently, an estimated 448,000 Israeli settlers live in the West Bank—344,000 inside the security barrier and 104,000 outside. Since Israel has nominally annexed East Jerusalem, it does not consider the 320,000 Israelis living there to be settlers, though other countries do. Either way, the percentage of settlers living inside the barrier is high: 86% with East Jerusalem included, 77% without.

In the past, most new settlement units roughly reflected this ratio, but last week’s approvals flipped it entirely—68.7% of the new units are located outside the barrier, and 31.3% inside. Building 1,609 units outside the barrier will mean adding an estimated 6,800 new Israeli settlers there, probably more given the typically larger size of settler families.

Despite his electoral success running at the head of right-wing coalitions, Netanyahu is routinely routed at the ballot box when attempting to woo settler voters who live outside the barrier. Those inside the barrier are more supportive, believing they will be annexed rather than displaced under any two-state arrangement with the Palestinians. In contrast, settlers outside the barrier do not see any way for their lands to be preserved under the two-state approach; they are far more likely to be given away if land swaps occur. Therefore, they are highly suspicious of Netanyahu’s ideological commitment to their welfare, and they have not been not easily swayed by his apparent retreat from the two-state approach in recent years.

Parties to his right have taken advantage of this fact, defeating him by a three-to-one margin among voters outside the barrier. This trend held true even during the April election campaign, when Netanyahu publicly mentioned the possibility of Israel unilaterally annexing portions of the West Bank. By having the government approve more units outside the barrier ahead of next month’s revote, Netanyahu may be trying to show the settlers that he is ideologically reliable. Perhaps unsurprisingly, one of the settlements that garnered the most new units (382) was Beit El. Located outside the barrier, Beit El is an ideological flagship settlement for the movement; it is also beloved by U.S. ambassador David Friedman, former head of the group American Friends of Beit El.

In addition to Israeli settlements, the government approved 715 new units for Palestinians in Area C, a zone that constitutes 60% of the West Bank and remains very politically sensitive. The Palestinian Authority holds various levels of control in Area A (Palestinian urban zones) and Area B (the environs of these urban zones), which total 40% of the West Bank. Israel has full security control of Area C, but the two parties have yet to agree on the status of this zone beyond that fact, making it a central arena for political combat.

The Palestinians often point to the zone’s economic value—in 2016, for example, a World Bank study concluded that the PA’s lack of economic access to Area C reduced its GDP by 35%. In Israel, however, a right-wing party led by former justice minister Ayelet Shaked and former education minister Naftali Bennett has dedicated itself to ensuring that Israel does not yield an inch of Area C. Among other measures, they engineered procedures in which no land in that area can be designated for the Palestinians without approval from the security cabinet. Both are very explicit in calling for Israel to annex all of Area C.

This political pressure explains why Israel approved so few Palestinian units in Area C prior to last week. From 2000 to 2016, it reportedly green-lit only 226 such units altogether, and none after 2016. So why 715 now?

For one thing, last week’s announcement came just as White House envoy Jared Kushner was traveling throughout the Middle East. Netanyahu may have believed that the Area C approvals would help Kushner as he toured Arab capitals and came under attack for the lack of details regarding the administration’s long-delayed peace plan. Yet the announcement of new Palestinian units received no attention in the Arab world, where governments instead focused on the new Israeli units outside the barrier. Other potential explanations include Israel’s embarrassment over recent home demolitions in areas under PA control, and its desire to blunt international objections to the large number of new Israeli units.

The exact location of these Palestinian units is unclear, and some have speculated they may never be built. In 1997, during Netanyahu’s first term as premier, he made a similar dual announcement, approving Israeli units in the East Jerusalem district of Har Homa at the same time as new Palestinian units; the latter were never built. Today, some housing in Palestinian villages at the edge of Area B has spilled over into Area C, so they are a possible venue for the 715 new units.

Despite growing skepticism, President Trump’s advisors insist they will still present their peace plan in the near future, even if not until after Israel’s September 17 elections. Yet if building two-thirds of new Israeli settlement units outside the security barrier is the new norm rather than just a pre-election aberration, it will sharply erode any remaining confidence in U.S. peace efforts. Since skepticism also abounds regarding the new Palestinian units in Area C, the Trump administration may be tempted to insist that these units will be built. In both cases, Washington should be guided by an understanding of where demography meets geography in the West Bank, and curtail excessive demands on both sides accordingly.

David Makovsky is the Ziegler Distinguished Fellow and director of the Project on Arab-Israel Relations at The Washington Institute, and coauthor with Dennis Ross of the soon-to-be-published book Be Strong and of Good Courage: How Israel’s Most Important Leaders Shaped Its Destiny (PublicAffairs/Hachette).