Greater delays, downtime, and problems acquiring new planes have made Iran feel the heat, but its civil aviation sector continues to generate revenue for the regime.

On March 25, France announced that it would halt Mahan Air’s four weekly flights to and from French airports beginning on April 1. The move followed Germany’s January ban on flights by the Iranian airline, a decision based on security concerns and Mahan’s involvement with illicit activities conducted in Syria by the Islamic Revolutionary Guard Corps.

Even amid this growing pressure, however, Iran’s airline industry has found ways to skirt certain sanctions and continue operating. Mahan still flies to Milan and Barcelona, for example, and travelers can then continue onto Paris via short alternative routes. Moreover, the company’s near-daily flights to Damascus have been hardly affected, despite the U.S. Treasury Department’s past finding that Mahan planes had been “secretly ferrying operatives, weapons, and funds” to Syria. A closer look at the industry’s current status provides more insight into such loopholes, and whether they can be closed.

Iranian civil aviation has been subject to U.S., UN, and European operational restrictions since the 1979 hostage crisis, and a more systematic sanctions regime was established in 2007. The sanctions relief measures afforded by the 2015 nuclear deal and UN Security Council Resolution 2231 did not provide much respite—of the more than 200 aircraft that Iran ordered from Western manufacturers during the subsequent grace period, only three Airbus jets and thirteen French-Italian ATR turboprops were actually delivered before U.S. sanctions came back into full force last November. Those sanctions also barred the provision of parts and technical services to Iranian aircraft that visit foreign airports; some airports have even refused to refuel Iranian planes, forcing them to travel with heavier fuel loads.

Currently, twenty-three Iranian airlines operate 156 owned or leased aircraft (26,626 seats) out of a total fleet of around 300 (48,000 seats), meaning about half of their planes are grounded due to lack of spare parts. The situation is expected to get worse, with another 8 percent of the fleet projected to go out of service each year. On March 14, the head of Iran’s Civil Aviation Organization, Ali Abedzadeh, predicted a difficult year for the industry due to sanctions, noting that the majority of domestic flights use old Fokker 100 and Boeing MD aircraft that will need to be retired soon.

Sanctions have mainly targeted Iran’s purchase of any aircraft that carry more than 10 percent U.S.-origin parts. Even Russian-made aircraft such as the Sukhoi Superjet SSJ100 are nearly impossible for Iran to buy because they include more than 10 percent American parts and subsystems; only undesignated airlines can acquire them, and must go through case-by-case licensing via the Treasury Department’s Office of Foreign Assets Control (OFAC) to do so. An “all-Russian” version of the aircraft is reportedly under development for U.S.-sanctioned countries, but it will be even costlier to operate than the original version or equivalent Western jets.

According to analysis by Clyde & Co., flagship carrier Iran Air stated in 2016 that it would require as many as 580 aircraft over the next ten years to replace its aging fleet, including 300 urgently within the next five years. Iran is nowhere near those numbers today. Moreover, it has not worked out whether the new INSTEX payment arrangement with Europe will allow for purchasing commercial planes, nor whether it will be able to obtain OFAC licenses for aircraft that will inevitably include substantial American components.

The industry is nevertheless forging on. Despite their average fleet age of twenty-three years, Iranian airlines have not suffered any grave deterioration in their safety record due to sanctions. In fact, the number of fatalities caused by air accidents in Iran has dropped in recent years, consistent with international trends.

In May and November 2018, the Treasury Department strengthened its sanctions against Iranian airlines, front companies, and individual aircraft. Previously, designated airlines were able to send planes they had leased from or registered to foreign companies for periodic servicing abroad. This tactic prompted the U.S. government to sanction individual aircraft more systematically, causing problems for airlines by grounding more planes and reducing the total number of takeoffs, landings, air passengers, and cargo tonnage (though domestic flights have managed to remain above pre-2015 levels). 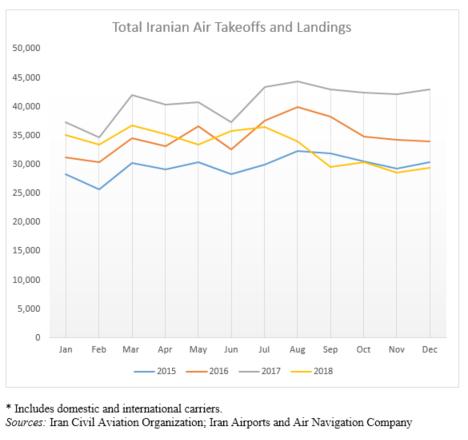 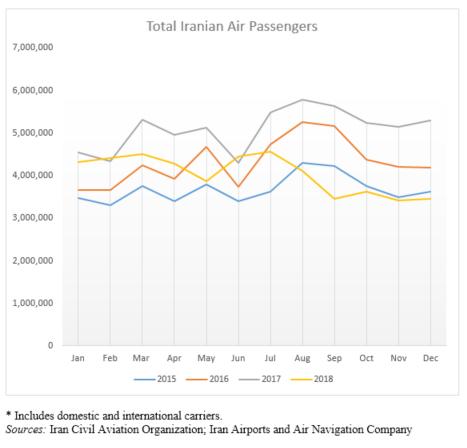 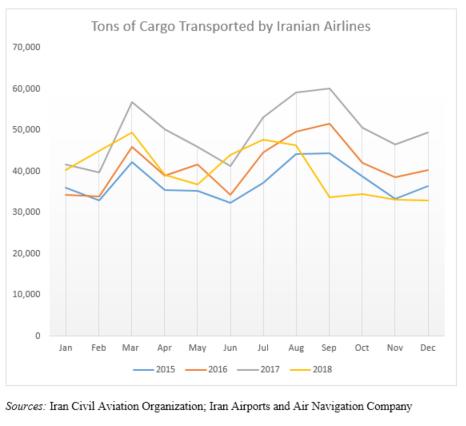 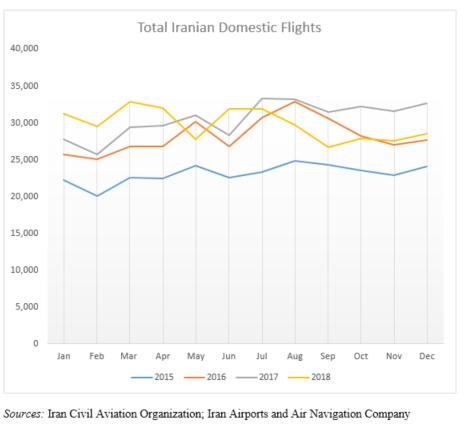 Iranian airlines are also incurring substantial costs by maintaining their aging fleets themselves, in part because they do so very inefficiently. For example, the country’s aviation sector has one employee on payroll for every available aircraft seat, pointing to inordinately high human resource costs.

Old planes also burn more fuel. Iranian airlines currently consume more than 5 million liters of fuel per day, 1.5 times higher than the international standard. Tehran recently increased production of jet fuel at five oil refineries to meet domestic demand, but sanctions bar the regime from exporting any surplus fuel to make up for the rising costs (with the exception of limited shipments to Afghanistan, Iraqi Kurdistan, and Armenia).

These problems—coupled with the fact that foreign travel among Iranians has dropped substantially due to rising airfares, travel taxes, and cost of living—mean that the Civil Aviation Organization will not be able to fulfill its major plans for expanding international destinations. One apparent exception is Venezuela; Mahan flew its first direct flight to Caracas on April 8, and Iran is hoping to establish regular service there soon.

The Iranian government is also expected to lose some of its income from overflight fees. More than 1,200 flights reportedly fly over Iran every day, many of which have been diverted there from regional conflict zones in recent years. Iran makes an incredible $800 million per year from this practice, charging around $1,200 for every overflight hour, or 20 percent higher than neighboring countries.

This year, Iranian overflights are down by an average of 15 percent compared to 2018, even with the temporary addition of as many as a hundred extra flights due to the recent India-Pakistan crisis. This trend can be expected to continue as more airlines move back to shorter routes over east Iraq in order to save time and fuel.

U.S. sanctions against Iran’s airline industry have achieved mixed results so far. The industry is clearly experiencing operational difficulties directly and indirectly related to the sanctions. It has also shown resiliency, however, repeatedly finding ways to operate at a near normal pace. Yet it remains to be seen how Iran will cope with the need to retire a large part of its operational fleet within the next three years while avoiding major disruptions, especially if new sanctions target the provision of fuel to all Iranian airlines at international airports.

Washington should also take note of the substantial revenue Tehran still generates from overflight surcharges, a portion of which help fund its military. Now that Iraqi airspace is fully open to international overflights, the U.S. government should press airlines to make less use of Iranian airspace.

Farzin Nadimi is an associate fellow with The Washington Institute, specializing in the security and defense affairs of Iran and the Gulf region.

Brief Analysis
The Tenacity of Young Iranians in the Protest Movement
Nov 29, 2022
◆