by Patrick Schmidt
Also available in
About the Authors

Patrick Schmidt
Patrick Schmidt is a U.S. naval officer stationed in Washington; he previously served in Bahrain and onboard the USS Ronald Reagan.
Brief Analysis

Following the February 26 Assembly of Experts election, Iran's Interior Ministry released full results on its website, while national and local news agencies released their own, sometimes different data. In addition to the unusual nature of the election itself (see PolicyWatch 2571, "Iran's Election Procedures"), the reported results show some odd features.

On February 29, Interior Minister Abdolreza Rahmani Fazli announced a 62% nationwide participation rate on election day, declaring, "I thank God for gracing us with an additional opportunity to demonstrate the people's enthusiasm for religious democracy to the international community, especially those countries that claim to be democratic." Many Iranian officials associate electoral participation, especially above 60%, as conferring legitimacy upon the regime.

The ministry also cautioned Iranians not to rely on unofficial sources for election results. Yet such warnings are problematic because the ministry's own reportage of results has not been wholly transparent thus far. The assembly election data on the ministry's Persian website -- a major source of information for Iranians and state-run news agencies -- has quite a few anomalies. For example, it shows some candidates receiving more than 120% of the votes cast in their district, and in four provinces with a total population of 15 million, it shows 22 million ballots cast. Fars News, a semiofficial news agency, provides clearer data than that found on the ministry's website, which lacks a page summarizing assembly results for all thirty-one provinces. 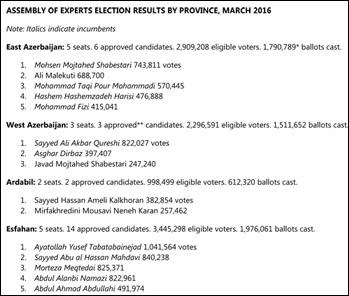 Assembly races are divided by province, and voters may write in the names of as many candidates as there are seats in their province. Yet many of these races were predetermined by the Guardian Council, the powerful twelve-member body that decides who can compete in elections and verifies the results, among other things. This year, the council's ideological vetting process disqualified the majority of candidates who applied to run. As a result, six provinces originally featured the same number of candidates as seats available (though in some cases extra candidates were added later on), while eight other provinces had only one more candidate than seats available.

Normally, such factors would have further deflated voter turnout for the assembly election, which is historically Iran's least popular political race. Citizens rightly view the institution as a largely ceremonial body whose main role is to select the Supreme Leader's successor, meaning it has little relevance to their daily lives. Given Ayatollah Ali Khamenei's advanced age, however, many Iranians likely assume that his successor will be selected during the assembly's next eight-year term. Moreover, the regime postponed the assembly election by almost a year-and-a-half to coincide with the more popular parliamentary elections, essentially guaranteeing turnout even in those provinces with seemingly noncompetitive assembly races.

Even so, several provinces showed significant discrepancies between the number of ballots cast and the number of votes received by winning candidates. Some provinces reported separate figures for ballots cast and ballots permitted, subtracting ballots that were illegible or otherwise disqualified; for example, East Azerbaijan had 1,790,789 ballots cast with 207,450 not permitted, while Esfahan had 1,976,061 cast and 283,024 not permitted. Yet this would not fully explain discrepancies such as the following:

In addition to the problematic vote totals, some winning candidates were named on the Interior Ministry's approved list for more than one province, while others were not listed at all:

The Interior Ministry and Guardian Council were responsible for vetting and distributing the official list of 161 approved candidates -- published on February 10, one day before the official campaign period began -- so it is unclear how and when Shahroudi and Shabestari  were approved to run.

Incumbents were reelected in 49 of the assembly's 88 seats; the tally could have been even higher, but many members in the last assembly were quite elderly and may have decided against running for that reason alone. In addition, at least four incumbents won seats in different provinces than they represented last term. Bagher Bagheri and Mohsen Kazrunbarz previously represented Tehran but are now representing Alborz. Muhammad Ali Muvahedi Kermani and Sayyed Abul al-Fazl Mir Mohammadi previously represented Kerman and Markazi, respectively, but both were elected in Tehran province for this term.

Meanwhile, five Guardian Council members also ran for seats in the Experts Assembly. Four of them won: Mohammad Momen, representing Qom; Mahmoud Hashemi Shahroudi, representing Razavi Khorasan; Ahmad Jannati, who placed sixteenth out of sixteen winners in Tehran; and Mohsen Esmaili, also representing Tehran. The loser was Mohammad Reza Modarresi Yazdi, who chaired the previous assembly. His loss means the assembly will need to elect a new chairman, perhaps at its first meeting on May 25.

In addition to Mohammad Yazdi, at least four other assembly incumbents were unable to win reelection. Hassan Mamhoudi lost in Kermanshah, while Muhammad Taqi Mesbah Yazdi and Ali Mumen Pour lost in Tehran. Gholam Ali Naim Abadi, the Friday prayer leader in Bandar Abbas and the Supreme Leader's representative in Hormozgan province, lost his bid for reelection in that province to Sayyed Ruhollah Sadr al-Saadati. Saadati was originally an approved candidate in Yazd, but the Interior Ministry announced on February 13 that he had switched to Hormozgan. Previously, on February 9, Guardian Council spokesman Siamak Rahpeyk had reaffirmed the law stating that assembly candidates had until February 11 to change which province they were competing in.

Finally, it is interesting to compare the election results with the candidate lists put out by different individuals and organizations during the campaign. For example, the "List of Hope" -- which was strongly associated with former presidents Akbar Hashemi Rafsanjani and Mohammad Khatami, as well as current president Hassan Rouhani -- endorsed sixteen candidates in Tehran, and fifteen of them won. The only Tehran winner who prevailed without its endorsement was Jannati, who came in last place. Moreover, eight winning candidates in Tehran were promoted on multiple lists: the previously mentioned Kermani and Mir Mohammadi, as well as Mohsen Qomi, Muhammad Kashani, Qorbanali Dorri Najaf Abadi, Mohammad Reishahri, Ebrahim Haj Amini Najaf Abadi, and Rouhani. These men appeared not only on the List of Hope, but also on lists published by Rouhani's office and the Qom Teachers Association, which is usually described as a very hardline organization.

Patrick Schmidt is a research assistant at The Washington Institute.