All the Tyrant's Men: Chipping Away at the Assad Regime's Core

Andrew J. Tabler
Andrew J. Tabler is the Martin J. Gross fellow in the Geduld Program on Arab Politics at The Washington Institute, where he focuses on Syria and U.S. policy in the Levant.
Brief Analysis

The regime's cadres have held together through two years of war, and they will likely continue doing so unless Washington and its allies present them with a stark choice: leave and live, or stay and die.

Bashar al-Assad has no exit strategy in Syria and does not believe he needs one. Two years after President Obama called for him to "step aside," he is still in power and still supported by a well-woven web of loyalists. Since Bashar's father Hafiz rose to power -- first as part of a coup in 1966, then by claiming the presidency for himself in 1970 -- the Syrian regime has developed into a network of elite military officers and businessmen connected by familial and sectarian loyalties. This network has yet to collapse despite pressure from the ongoing civil war. Yet a closer look at recent developments and the language of U.S., EU, and Arab League sanctions indicates where wedges could be driven if Washington wants to bring about a real transition.

WHO'S WHO IN THE SYRIAN REGIME?

The Assad regime's core is a family business: the president is surrounded by his brother, his uncle, and a slew of cousins. 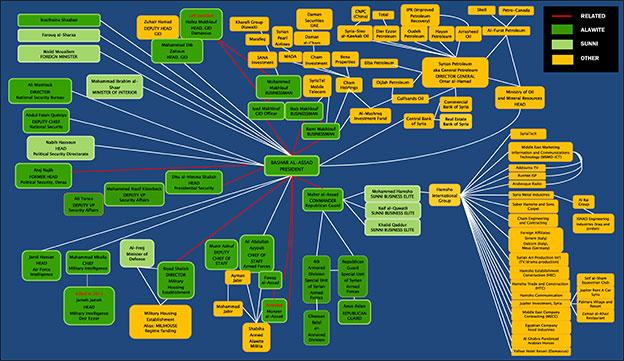 Although Bashar still wields executive power, his younger brother Maher has robust powers of his own. Maher is a Republican Guard commander whose marriage to a Sunni woman -- Manal (nee al-Jadaan) -- strengthened his business connections with the Sunni elite. His brother in-law is Mohammed Hamsho of Hamsho International Group, a large holding company with subsidiaries and affiliates in multiple industries (e.g., construction, horse breeding). Washington and Brussels have sanctioned these companies along with Hamsho himself (see the note at the end of this article for details regarding the sanctions on Hamsho and other regime figures). Sanctions have also been applied to some of Maher's other Sunni business associates.

In addition, Maher oversees the regime's newest and perhaps most menacing manifestation: the armed Alawite militia known as the Shabiha. His paternal cousins Fawaz and Munzer lead the militia; along with Ayman and Mohammad Jaber, they coordinate with the regime through Maher.

The next layer out from the core consists of Hafiz al-Assad's old friends serving in security and intelligence directorates under the Ministry of Defense (Air Force Intelligence and Military Intelligence) or Ministry of Interior (Political Security and General Intelligence). Regime elites have served in multiple offices within these ministries over the years, often working with each other. One such official, Abdul Fatah Qudsiya, moved across the Defense Ministry's intelligence agencies, serving as head of Air Force Intelligence, then as head of Military Intelligence from 2009 until his promotion to deputy chief of the National Security Bureau in 2012. While most elites rose to prominence through normal rank advancement, a few were "cross-trained." For example, Rustum Ghazali, a Sunni from the Houran region south of Damascus, served in both the Defense and Interior Ministries. He was head of Military Intelligence in Damascus and Lebanon until 2012, when he became head of the Political Security Directorate -- a post he took over from Mohammad Dib Zaitoun, who became head of the General Intelligence Directorate in 2012.

Yet movement between the four intelligence agencies is rare, and their existence as separate entities allows the regime to balance and limit the power of individual elites. Like Saddam Hussein's Iraq, Syria's intelligence structure seems designed to build up elites with varied backgrounds while limiting their actual power and, therefore, the potential threat they pose to the familial core.

ASSASSINATIONS, A DEFECTION, BUT THEN NOTHING

July 2012 could have been the regime's downfall. In a targeted bombing that month, the regime lost four of its staunchest and most powerful figures: Hisham Ikhtiar, Daoud Rajiha, Assef Shawkat, and Hassan Turkmani. Rajiha served as armed forces chief of staff until 2011, when he was promoted to defense minister. Shawkat -- a relative of the president by marriage to his older sister, Bouchra -- served as Rajiha's deputy, perhaps to assure his superior's loyalty (Rajiha was Greek Orthodox, the core regime's only Christian member). Upon Rajiha's death, former chief of staff Fahd Jassem al-Freij became defense minister. Yet Shawkat's deputy post was left vacant, further suggesting his unique role in the regime and indicating his deep professional connections with Freij.

Hassan Turkmani, arguably the highest-ranked Sunni in Assad's upper echelon, played a unique role as well. A former defense minister (2002-2004), he was serving as a close security advisor, special envoy of the president, and deputy vice president at the time of his death. His posts were left vacant, indicating that his service to Assad was based on their personal relationship. And Hisham Ikhtiar, a former General Intelligence chief, was head of the National Security Bureau at the time of his death. He was replaced by Ali Mamluk, a trusted regime elite and cofounder of the Air Force Intelligence Directorate.

Although observers initially regarded the deaths of these four elites as big losses, the regime seemed to fill the breach quickly. As mentioned above, the Assad regime is designed to foster trusted, experienced elites who can be moved up in the power structure in easy, interchangeable fashion. In this case, Turkmani and Shawkat were serving in unique administrative roles based on their personal relationship with Bashar, so no replacement was required, while the other two victims were replaced by experienced officials via traditional promotion -- in Ikhtiar's case by an even more trusted regime figure.

The only significant defection to date has come from the Sunni military elite that Hafiz al-Assad built around the regime's inner core. Shortly after the July 2012 bombing, Republican Guard commander Manaf Tlass fled the country and announced his support for the opposition Free Syrian Army from the safety of his family's home in Paris. Historically, the Tlass clan was perhaps the closest Sunni family to the regime. Patriarch Mustafa Tlass served with Hafiz al-Assad in the air force academy and later as his defense minister from 1972 to 2004, while Manaf and his older brother Firas were childhood friends of Bashar. Firas chose a career in business, starting the MAS Group of agriculture and food service companies in 1980. Both sons fortified their links to the regime through marriage: Firas married into a prominent Sunni Aleppine family (Rania, nee al-Jabiri), and Manaf married a powerful Damascene woman (Tala, nee al-Kheir), introducing Bashar to Sunni merchants through their connections. When the Tlass clan cut ties with the regime last year, it was more significant from a personal perspective: while the family was politically powerful in Hafiz al-Assad's era, the younger generation was not as involved in government. Thus far, then, their defection has not provided a wedge into the regime's inner core.

The last significant blow to the regime was over a year ago, and it did not do enough damage to shake the president or his intricate network of loyalists. The regime has reorganized somewhat since the uprising began, but it has not cracked. Given the Assad family's decision to shoot its way out of the crisis and use missiles and chemical weapons on the Syrian people, the chances of one of the president's relatives defecting or being offered safe haven are likely nil. For now, the specter of being decapitated by the opposition's growing contingent of Sunni extremists is keeping the regime together.

Yet the armed forces and the non-blood-linked security services may be susceptible to pressure, since they have the most to lose from a war that is becoming increasingly sectarian, from the prospect of becoming an Iranian satellite state, and from the raft of persistent sanctions. Another opportunity lies in expanding the sanctions net to include more businessmen near the regime's core, then offering to lift sanctions on them in exchange for providing information on the regime and breaking with it. But much of the outcome now depends on whether Washington and its allies are willing to use military means -- such as surgical strikes and arming the opposition with more formidable weapons -- to put regime members on the horns of a dilemma: leave and live, or stay and die.

Grace Abuhamad is a research assistant at the Governance Lab and a former research intern at The Washington Institute. Andrew J. Tabler is a senior fellow in the Institute's Program on Arab Politics.

Below are details about U.S., EU, and Arab League sanctions that have been imposed on the regime figures mentioned in this PolicyWatch. For more information, consult the relevant government lists of U.S. sanctions and EU sanctions (PDF).

Brief Analysis
End of the Qatar Embargo: An Opportunity, not Threat, for Turkey
Jan 22, 2021
◆