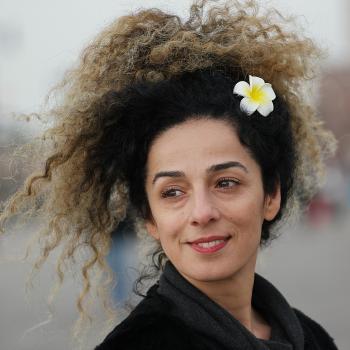 Masih Alinejad is an Iranian American journalist and political activist known for her tirelyess promotio nof women's rights, freedom, and democracy in her native country.

Alinejad was born and raised in a small village in Iran, and was politically active from a young age. She began her career as a journalist within the country, writing critically of the regime for various Iranian newspapers. She fled Iran in 2009 and in 2014 launched My Stealthy Freedom, a Facebook page that invites Iranian women to post pictures of themselves without a chador. During this time, she also started White Wednesdays, where women throughout Iran wear white to peacefully protest the compulsory garment. Since 2014, her campaign has garnered over one million likes on Facebook.

Currently, Alinejad hosts a program on Voice of America Persian and continues her activism from New York via social media. Alinejad is the author of multiple books, including her memoir, The Wind in My Hair: My Fight for Freedom in Modern Iran, published in 2018. Despite the Iranian government’s multiple attempts on her life to silence her, Alinejad continues to speak out for freedom and liberty for all Iranians, women and men.

Alinejad is the recipient of The Washington Institute's 2022 Scholar-Statesman Award. 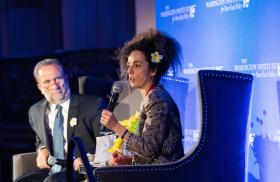