By allying with the Syrian regime, the YPG implicitly signaled to the U.S. government that the Kurdish group will act based on its own interests.

As of July 28, the Syrian army had completely cut off the Castello Road, which links East Aleppo with areas outside the city. Crucial in this development was the supporting role of the U.S.-backed People's Defense Units (YPG), based in Aleppo's Kurdish neighborhood of Sheikh Maqsoud.

Aleppo's rebel-controlled districts are now surrounded by the Syrian army and Shiite militias that support it. Having pursued just this objective since January 2014, when the Syrian regime began heavily bombing the city's eastern districts to drive out the civilian population, Assad and his allies can now claim a major victory. Russian air support proved decisive in the effort, crushing rebel defenses with a barrage of ordnance.

From Sheikh Maqsoud, the YPG fired on the rebels defending the Castello Road. YPG forces temporarily took control, on July 26, of the public Youth Housing Project, protecting the left flank of the 4th Syrian Armored Brigade, which progressed southward from Mallah Farms. The YPG also attacked the Bani Zaid district, to the west of Sheikh Maqsoud, forcing the rebels to retreat to avoid being caught between the Syrian army and the Kurdish forces. Since summer 2012, the rebels have made repeated attempts to seize the Sheikh Maqsoud district. Whereas the YPG might have remained neutral in this battle, the group clearly indicated its preference through its actions, contributing to its overall strategy of cooperating with Russia in order to connect the Kurdish enclaves of Afrin and Kobane. 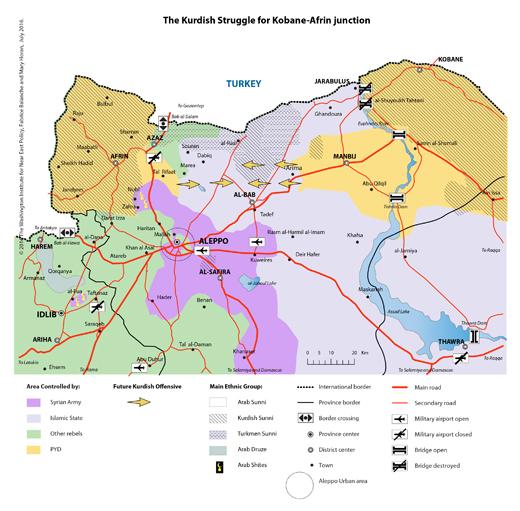 This past February, the YPG in Afrin similarly worked to back Syrian government aims, joining with the Arab brigade Jaish al-Thuwar (Revolutionary Army), Shiite militias, and the Syrian army, aided by Russian airstrikes, to close the rebel corridor connecting East Aleppo and Turkey (see PolicyWatch 2554, "The Battle of Aleppo Is the Center of the Syrian Chessboard"). 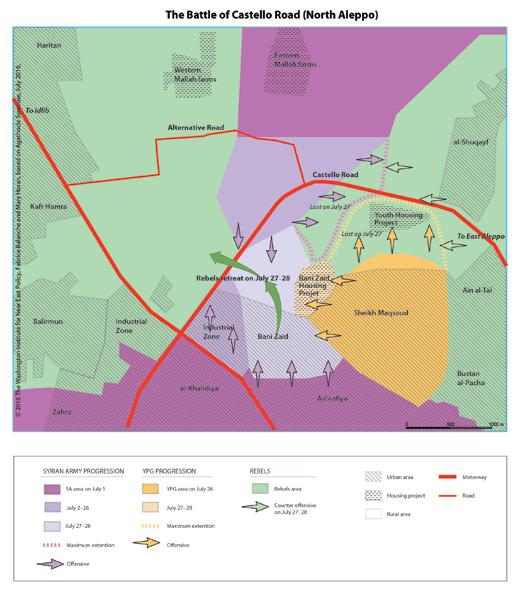 Battlefield Options for the YPG

Given that the YPG is a centralized organization, one can assume it is operating based on shared objectives on the separate fronts -- Sheikh Maqsoud, Azaz-Marea, Manbij, and Hasaka. The YPG's front lines now push up against Islamic State territory in northern Aleppo province. To be sure, the group will be willing to participate in the next anti-IS offensive, enabling it to realize the territorial unity of a Syria-based Rojava Kurdish state.

According to this thinking, once Manbij falls to the Syrian Democratic Forces (SDF), consisting of YPG and Arab brigades, the YPG likely will not agree to withdraw from the city, as the U.S. government announced would happen last June at the beginning of the Manbij battle, thereby leaving power to the Sunni Arab SDF militia. Instead, YPG forces might continue westward with Russian air cover and weapons, if Western support is lacking. Highly improbable for the YPG is an approach to the Turkish border, given that the Kurdish force would face shelling from the Turkish artillery, as has happened previously in Azaz and Jarabulus. Likewise, it might not attack the city of al-Bab, west of Manbij, because such an objective would be too difficult and the city has no Kurdish population. Rather, the YPG might reasonably seek to occupy the Kurdish villages to the north of al-Bab, up until Tal Rifaat, which could facilitate an eastward offensive.

Certainly, YPG control over this strip of territory between Manbij and Afrin will be fragile, given that the population is Arab majority, but the Kurds will be supported by the Assad-Putin alliance, which has a strong interest in containing rebels within the Azaz pocket, to the north of this future Manbij-Afrin Kurdish axis. Such an achievement would deprive the rebels of an access route to the Euphrates River valley, complicating the resumption by pro-Western Arab forces of the campaign to retake Raqqa.

The entire situation leads to two divergent conclusions: either the YPG wishes to retake Raqqa alone, thereby making itself indispensable to Western powers in Syria, or it has reached an agreement with Assad and Putin, who definitively have not lost hope of regaining the Euphrates valley.

For the United States, this recent instance of YPG support for the regime is deeply troubling, given U.S. backing for the group. But the YPG activity also raises questions about the U.S. government's broader decision to prioritize eliminating the Islamic State over all other objectives in the Syrian war. As this case shows, the YPG's agenda is very different from that of the United States. If working with Syria, Russia, and supporting forces advances the group's goal of expanding Kurdish control, the YPG will do so, even if such a course requires fighting against the moderate opposition. The United States should thus consider supporting other groups -- namely, Sunni Arab rebels -- to counterbalance its backing for the YPG. 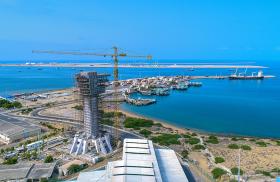